“Be anxious for nothing …”

Many people in the world are anxious and worrying about current events. We seem to forget that everyone is going to die sometime (Hebrews 9:27). It is only a matter of how and when. Where we spend eternity is of far more importance as it is forever. The arrogance of man is that he thinks he can save himself by defying the Creator who sustains his very being.

Some think they can save the world by maintaining the climate as they believe it was. In this they often forget that the world has been changing considerably during its existence. They acknowledge that there has been an ice age and therefore considerable global warming since then.

Now we have a virus that has allowed governments to turn countries into police states with absolute control of people’s movements. Stores have signs saying they will not accept cash payments. The world is anxious and has therefore surrendered individual rights. As we read prophecies in the Bible it seems we are on the verge of the removal of Jesus calling out His church prior to the Tribulation period. The stage is being set but is that a reason for Christians to be anxious?

The context of Paul writing this explains how and why we don’t need to be anxious. In the previous verse he has written, “The Lord is at hand.” He is not far off and He is coming again. In verse four he wrote, “Rejoice in the Lord always.” We can rejoice and not be anxious because each day brings us nearer to that day of our deliverance (Romans 13:11). The fact that we are able to observe this in a way that previous generations could not is the reason we can rejoice and not be anxious. We are concerned for our unsaved family and friends and this will be expressed in more fervent prayer and willingness to share with them. Anxiety is a slur on the character of God.

There is a remedy for anxiety. Faith in Jesus is the remedy. Jesus said, “In the world you will have tribulation; but be of good cheer, I have overcome the world” (John 16:33). Reading the Bible will reveal to us how frequently God’s people have been in dire situations yet He delivered them. Paul writes, “Faith comes by hearing and hearing by the word of God” (Romans 10:17). We cannot just dispel anxiety. It is not in our power to do so. It is there or it is not. Knowing and believing God’s word is the way God frees us of anxiety so we can rejoice in faith in Him.

None of us had a choice in the timing or location of our entrance into this world. We didn’t choose our parents, siblings, ethnicity, country, body shape, eye colour or natural talents. We weren’t consulted about any of these and many other things. The same was true for Esther yet she found herself in a position to affect the future of a dispersed nation. Her cousin, Mordecai, was also in such a position and he took it by the horns. His life was under threat already and he asked Esther to place her own life in jeopardy as well. He reminded her that if she did nothing she would die anyway and she would lose the opportunity to have this vital role in her people’s future.

You and I are here in this world where we are and in this time not of our choosing but, like Esther, God has prepared and placed us for such a time as this. The question we face is the same as that which Esther faced. Will we take the opportunity God has given us and use it to preserve His people and to save others?

To the faithful church in Philadelphia Jesus said, “I know your works. See I have set before you and open door, and no one will shut it; for you have a little strength, kept My word, and have not denied My name” (Revelation 3:8). The circumstances in which we find ourselves are, for those who are faithful to the Lord Jesus Christ, an open door for ministry to others who belong to Christ and for sharing the Gospel of Christ with others. Yes, there is the possibility of an undesirable reaction from some. Esther put her earthly life on the line. Let us remember that Jesus didn’t just put His life on the line for us, He gave His life as a ransom for us. We know the outcome for Esther and Mordecai but when they were making their choices they didn’t know what they might suffer or what the outcome would be. That is where we are too but “we know that all things work together for good to those who love God, to those who are called according to His purpose” (Romans 8:28). We are here in this world, placed where we are with the preparation the Lord has given us, with an open door before us. All that remains is for us to choose whether we will serve Him or not. James tells us that faith without works is dead (James 2:20). Genuine faith in Jesus Christ is will be seen in how we minister to one another and reach out to others in such a time as this.

“Take heart, men, for I believe God that it will be just as it was told me”

This account of Paul’s shipwreck has many things to teach us. First and foremost is the quote above. As we read the Bible we find multitudes of similar situations where a person or people have taken God at His word literally. It is folly not to do so. Paul had been told by an angel sent by God that if everyone stayed on the ship all would be saved. Only the ship would be lost.

Paul, God’s man, had warned against taking this journey at this time (v 10) but the experts contradicted him because they had a vested interest (v 11). The majority also ignored his warning because they were impatient (v 12). In the Bible we notice that the experts and the majority are frequently wrong. When the storm hit they believed they could weather it without Divine help and took the usual means to keep the ship afloat. The ship’s tackle was thrown overboard on the third day (v 19) and later the ship’s cargo followed but none of this helped.

In this dire situation when all hope was lost (v 20) only the man of God had an answer and eventually the others allowed him to take the lead. For any to survive, they all had to stay on the ship (v 31). Some, who did not trust Paul’s word from God, tried to leave but were thwarted (v 30). Paul knew the day of deliverance was at hand and led the crew, soldiers and passengers in thanks to God for their deliverance before they were saved. That is true faith. The end was as the angel of God had told Paul. The ship was lost and everyone on board was saved (v 44).

The ship is a type of Christ. He died that we might live. All who are in Christ will be kept safe. The key to salvation is in verse twenty five quoted above. Like Paul, we must take God at His word and stay with Jesus Christ. The centurion, named Julius (v 1) was persuaded by the experts and the majority before the storm (v 11) but later we discover that he chose to believe Paul (v 31). Later still, he was protective of Paul (v 43). The faith of Paul did not keep him from the storm and shipwreck but it was the means God used to cause the centurion, and probably others, to realize that God’s word is superior to that of the experts and multitude. Whether any received eternal salvation we are not told but there is a clear salvation message and illustration for us. Paul took God’s word literally and so should we.

Dr. John Anderson, from Creation Ministries International, visited Foothills on Sunday 11 March 2018 and gave his testimony entitled “Evolution of a Creationist”. You can listen to the audio recording here.

“Evolution of a Creationist”

Our visiting speakers were Steve and Terry Early from SIM. They spoke at the Foothills Church of Christ Missions Weekend on 21-22 October 2017. 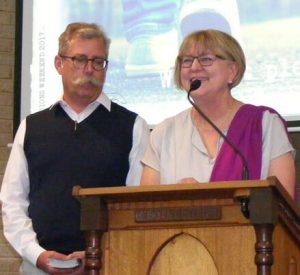 Sunday evening: “When It Pleased God”

The sign of the rainbow was given to remind us of the Great Flood. This flood was God’s means to destroy all men – except for those who trusted Him for salvation by entering the ark. After saving Noah and his family in the ark, God instituted the rainbow as a sign to remind all mankind that the Flood was a real historical event, that Noah and his family were saved via the ark, and that such a Flood would never happen again.

So the rainbow is a reminder of the flood judgment; and a symbol, or picture, of God’s covenant promise not to flood the world again. The ark is a picture of the salvation offered to us through Jesus Christ. The rainbow is a reminder of God’s judgment and His grace. In God’s Word we are warned of the coming judgment of fire, which will be the second worldwide judgment of all who refuse to accept God’s free gift of salvation.

Whenever you see the colours of the rainbow, remember that it is only through Jesus Christ that you can have eternal life free from sin! For those who would like to follow Adrian & Michelle’s trip around our country, look up “Big Blu’s Big Adventure” (bigbluadventures.com).